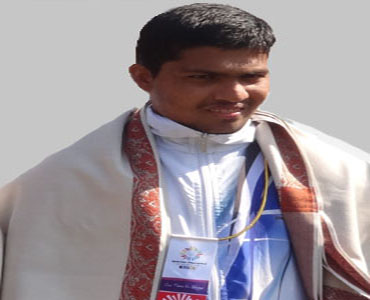 The lives of Children with special needs are undergoing remarkable changes with the efforts of Blind welfare council Dahod,  Gujarat

Our shining star at International level, and now an earning member of the family

Master Girish Gosai our sparkling star has gone beyond the borders of our continent.

Girish Gosai has represented our country at the Asia Pacific Special Olympics 2013 held at New Castle in Australia.

Nobody could have ever imagined that a mentally challenged loving boy could present himself for Asia Pacific games in Australia.

First of all at the district level then at state level and then National level, in all his games he earned many medals. He also participated in the National coaching camps and exhibited his skills in dribbling, shooting etc. It was only because of his skills and constant encouragement of BWC family that he moved ahead winning medals after medals and ultimately he went to Australia to represent our country in the Asia Pacific Special Olympics 2013 and stood at fifth position.

Girish Gosai who is with MILD mental DISABILITY but is physically strong. He was born on 1st September 1993 in a backward and tribal village named Kharol situated in Lunavada taluka of Mahisaagar district of Gujarat State.

As Girish had not being doing well at his regular school he was admitted in our Multi handicapped residential school in 2006. From the very beginning, our teachers noticed that Girish was very much interested in sports and games and other cultural activities in the school. He was not interested at all in academics. Above all, he liked to play football very much.  Our sports coach Mr. Virendra Baman noticed his interest in playing football and started refining his football talents with the help of other teachers at the school. They could collectively turn him into a good football player. He was exposed to various training camps at State and National level. He also participated in the District, State and National tournaments of football and won several medals. Ultimately he succeeded in representing our country in the Asia Pacific Special Olympics 2013 in Australia where he stood at 5th position.

He had represented our country in Asia Pacific special Olympics tournament held Australia during Nov- Dec 2013 where about 2000 athletes from 30 countries participated. 383 were from India and 31 from Gujarat. In such tough competition, he performed very well.

All the staff members and the Trustees of BWC, feel proud of this achievement. Most happy are the parents of these children who had never seen an airplane or had even traveled in the train, to see that their children had flied to some other country because of their association with BWC Dahod and the hard work of the teachers.

Girish is still taking training of football and other games through various tournament and camps. Further, he is now under training also for general assistant since last three years. He is in under direct supervision of our Administrative officer Mr. Abbas Kharodawala. He is being trained for doing all officer assistance work like simple filing, serving water and coffee to the guests, showing different offices to the guests. Opening and closing of different offices and store rooms. He also works in hostel area and helps other hostel children who need it, under the supervision of hostel warden.

He takes part in Special Olympics games, mainly in his favorite game Football. He is progressing nicely and trying to cope up with helping the other children as well as the office staff with his level of intelligence. He is paid Rs 2000/- per month as an honorarium for his service along with free accommodation and food.

The parents are very happy to see the transformation of their child with special needs. They remember Girish of 2006 where he was doing nothing, they wondered when he flied to Australia in  2013 and now since 2015-2016 he has become an earning member of the family. He is coping very nicely in all fields, learning social behavior and trying to be like a gentleman.

All of us at BWC wish him success for his bright future.